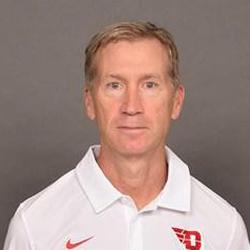 Jim Collins joins the Dayton football coaching staff being known as a high energy leader with a proven track record of building and directing successful football programs, developing a winning culture, setting a standard of excellence, emphasizing high academic achievement, developing talent, and aggressively recruiting outstanding student athletes. Collins was most recently at Army West Point (2019) where he was the Director of Player Personnel. Before that, Collins was the Head Coach, Offensive Coordinator, and Quarterbacks Coach as Saginaw Valley State from 2008-2019. Collins led his team to three straight Great Lakes Intercollegiate Athletic Conference North Division Championships from 2011-2013 as well as three NCAA Division II playoff appearances (2009, 2011, 2013). Collins’s teams ranked in the Final National Poll twice (2009, 2013) and Final Regional Poll six times (2008, 2009, 2011, 2012, 2013, 2018). Collins was also the Head Coach, Offensive Coordinator, and Quarterbacks Coach at Capital University in nearby Columbus, Ohio from 1997-2007. He was named Ohio Athletic Conference Coach of the Year on three separate occasions (2001, 2003, 2006). During his tenure there, Collins led his team to three NCAA Division III Playoff Appearances (2005, 2006, 2007) and his Team was ranked in the Final National Poll 3 times (#3 in 2006, #5 in 2005, #13 in 2007).

Want to sponsor? Contact us to find out more.